Yes that’s right friends, ninjas.
Our boys had a busy start to the summer with a vacation in Florida, a visit with family in Georgia and then family visiting us in Texas. When all the excitement died down at the end of July, boredom crept in and they started getting antsy. August is brutally hot this time of year in Central Texas with temps hovering around 100 degrees so we don’t get outside as much as I would like. About three weeks ago I suggested we start school a little early and to my surprise the boys jumped excitedly at the idea. So the following Monday, August 1st, we started our first day of school.


I really wanted to ease into our school year for all our sakes. The boys had very little structure over the summer and it can be hard initiating a daily school schedule when there is not a finite separation between home and school. I also knew I would be working much more in depth with Cullen and wanted to see how he responded to sitting at the table for a project or listening to a story with more difficult vocabulary than he was accustomed to. Factor in a now mobile baby sister, and the upcoming school year was looking a little daunting.
I’m a big fan of child-led learning. It’s one of the many things that drew me to homeschool. I believe we naturally apply ourselves more when we are interested in a subject matter. Obviously, there are things that need to be learned no matter the interest level but I’ve found that with a little creativity, you can take a child’s interest and turn it into an extensive lesson plan encompassing a multitude of subjects. Since I hadn’t planned on starting school until mid August, I decided to give the boys free reign on subject matter for the first three weeks of school. I asked them what they would like to learn more about and was met with the unanimous answer of ninjas. I wasn’t the least bit prepared for this answer. I thought for sure it would be animals or the ocean or something else science related.
Nope.
Ninjas it was and there was no way I was going to talk them out of it.
Both my boys take karate which I’m pretty sure led to the fascination of ninjas so I decided to start there. The form of karate they practice is called Tang Soo Do which is a Korean style karate with some Chinese influences. All the commands are given in Korean and they are required to learn these as well as many other words as they progress in belt rank. Thanks to our awesome instructors and karate manual, Draven learned several new commands in Korean and we worked with Cullen on counting to ten in Korean.

Cullen practiced spelling simple words by both writing and using letter blocks. Draven has been vocal about wanting to learn Chinese as well so we practiced writing the five Chinese characters that are represented on the Tang Soo Do flag (foreign language and spelling…BOOM!)


We also worked on memorizing the Eight Key Concepts of Tang Soo Do and their school’s Student Creed that the boys will be expected to know for future belt tests (memorization, handwriting and art…BOOM!)
There were a few days we snuck in some real fun. I let the boys play ninjas while their baby sister was sleeping and gave them tasks to complete like army crawling under and around things and collecting weapons (picking up toys). This is an awesome quiet time game because ninjas are super sneaky and quiet. We also found an easy tutorial via

Youtube on making exploding ninja stars and had a blast throwing them at the fence outside (arts and crafts, science and hand-eye coordination…BOOM!)


Several days I read aloud about China from The Story of the World and Draven worked independently through two Magic Tree House Fact Tracker books, one on Ninjas and Samurai and the other on China. The Fact Tracker books never disappoint – they are chock full of history in a fun to read and easy to understand format.
We also used our Pin It Map to label China and it’s rivers, mountain range, desert and adjoining seas. Draven drew and labeled his own map of China with a narration from The Story of the World (history, geography and language arts…BOOM!)
Our final projects will be finished this week and are original pieces by the boys culminating all they have learned in our three week unit study. Draven is writing a fiction book titled The Ninjas Versus the Samurai. Cullen is working on several artistic ninja pencil drawings (it’s okay, you can laugh).

. Both have high aspirations of selling their finished products (creative writing, handwriting and art…BOOM!) 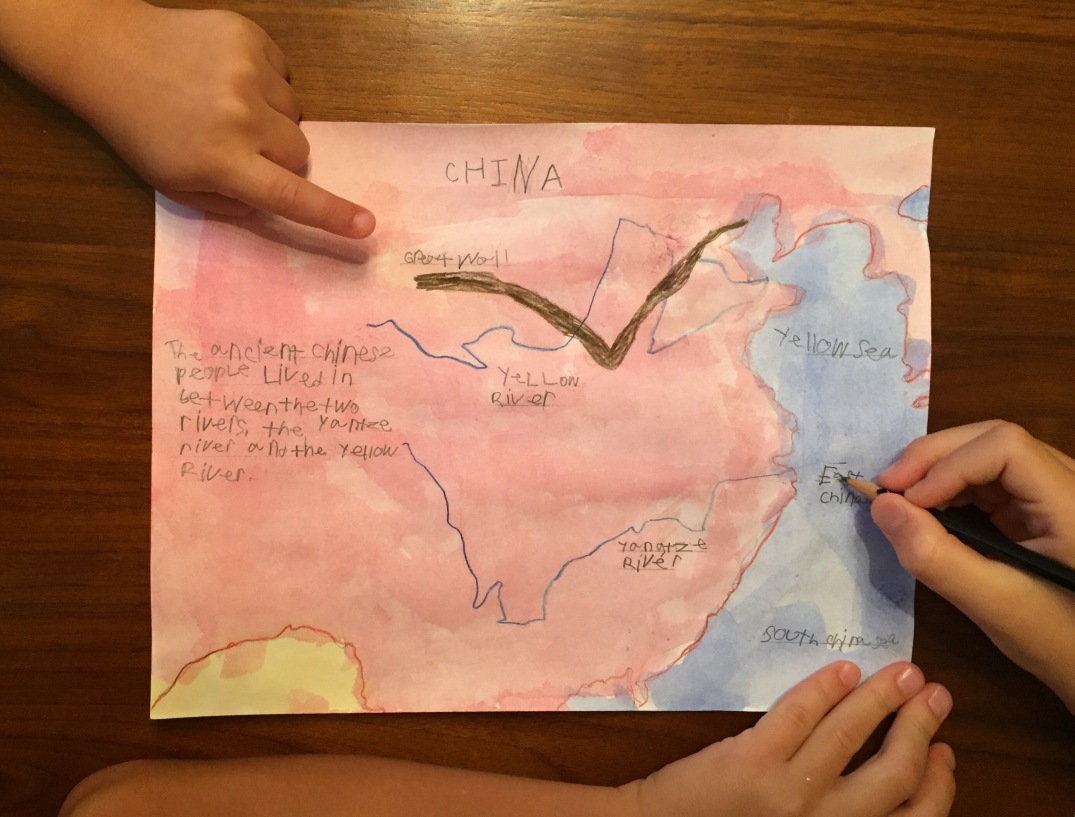 We spent about 1-2 hours a day for what will be three weeks. It was a lot more educational than I thought it would be and a ton of fun. Both the boys were really engaged and that’s not always an easy feat with a 7 and 4 year old. I would definitely encourage a project like this even if you don’t homeschool. It’s a great way to learn more about your child’s interests and just get them excited about learning. Deep down I think we all just want our kids to find something they are passionate about. Something that stirs their soul. Their interests most certainly will change as they grow and mature but it’s never to early to light that fire and instill a love of learning.